I was 19 and a university student in the Netherlands when I decided to pack my bags to travel deep into Borneo. The Indonesian part of this island is known as Kalimantan. I did it because of a boy. Well, a man, technically. And this man had a way with words...

He wrote a journal, titled The Gardens of the Sun; or, A Naturalist's Journal on the Mountains and in the Forests and Swamps of Borneo and the Sulu Archipelago. I was inspired by this 19th-century botanist's notes. Oh, were you expecting something romantic? Sorry about that. This was pure academic text. Because I'm a nerd like that.

But his writing still gave birth to one the biggest loves of my life: a longing for Borneo, its people and its lush jungles. It was 2006 and I made a home amongst the indigenous Dayak people who took me in like I was family.

It was The Trip Of A Lifetime; a life-shaping discovery that still gives me direction to this very day.

You might have spotted that I have some Indonesian heritage. Yet, the only Bahasa Indonesia I knew at the time were names of food dishes served at family meet-ups.

19-year old me plunged into a culture where the words didn't mean anything to me - unless it was a menu in a restaurant.

I came back twice for extended periods. I learned the language and ate a lot more cassava leaves than I liked. I noticed that the people I lived with longed to be part of the outside world. They wanted to go to school. Have cellphones. Wear skinny jeans. They simply didn’t want to feel left out from the world they saw on the single chunky analogue TV in their village.

They got some of what they longed for by selling off their forested lands to big corporations. Think logging companies, coal miners and oil palm plantations. As you can imagine, they weren't getting the fair end of the deal.

And so, with a background in tropical forestry, I worked hard to fight for their rights. I wanted to make sure the true owners of the land received transparent information and fair compensation. Their future and that of their kids and grandchildren depended on it. 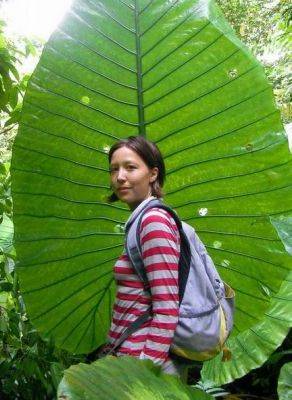 Well over a decade since I first set foot on Borneo - two children; one depression, a burnout and an uneventful resurrection later - I started a small jewelry business. Named after that botanist's journal. Like the ferns he wrote about, my Gardens of the Sun grew.

And then, it struck me. I've come full circle. I’m back to where I started all those years ago. Back then working to make oil palm plantations more sustainable to give back to the people that shaped me.

To help them connect with the world outside of their own. I'm now doing exactly that, this time through jewelry.

Last year, we partnered with a group of 10 indigenous women. All gold miners in Central Kalimantan. They help us find mercury-free gold with a low environmental impact. I spent two years searching for these amazing women. It was like looking for gold in the rough (ha!). I wanted to be sure that our gold went beyond mercury-free: to also support livelihoods.

I travelled to Central Kalimantan to meet these inspiring women in November 2018. Studies around the world have confirmed that empowering women benefits the whole community. This was no exception.

The NGO Yayasan Tambuhak Sinta offered both me and these women guidance. They educated the miners on the detrimental impact of mercury. These 10 women committed to stop using mercury and use traditional alluvial gold panning methods. Think low-impact and safe for the environment (and humans).

In return, we buy their gold at a 20% premium as compared to the national gold price. That's double the premium paid for Fairtrade gold.

And so, with the launch of our new Origins collection, the circle is round. It's filled with love from and for the heart of Borneo.

Want to see the first batch of gold harvested