Everything You Need to Know About Rose Gold

Juliet famously proclaimed "What's in a name? That which we call a rose, by any other name would smell as sweet." as she waxed poetic about Romeo. In jewelry, gold is glorious in all its shades. But one as sweet as its name, is the romantic rose gold, with its hint of copper that tints the rose gold in a flush shade of a blush. 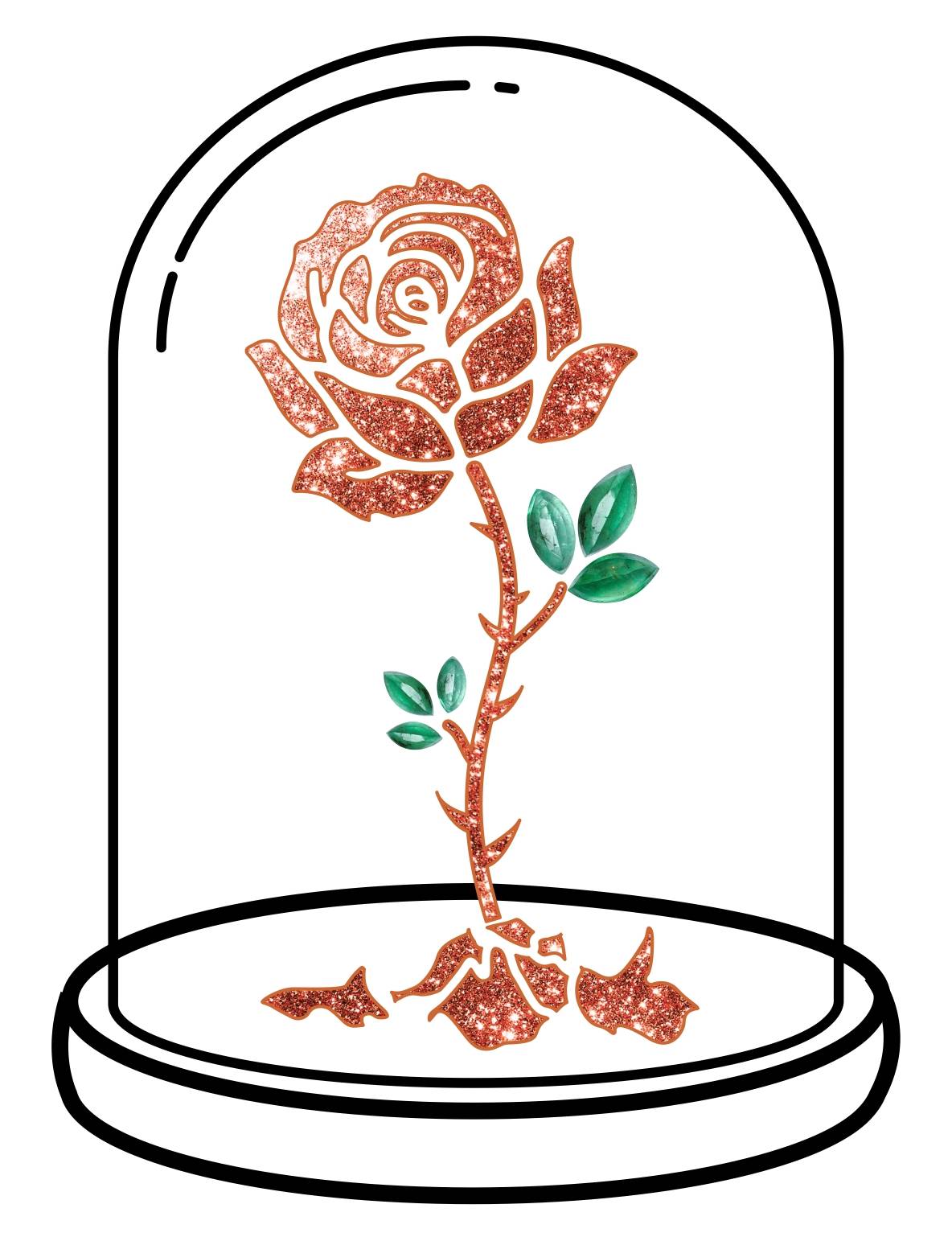 In the early days, rose gold was known as Russian gold. This was because it was first used in Russia, in the early 19th century by Carl Fabergé (yes, oftheFabergé Eggs fame). Fabergé used what was dubbed as Russian gold to accentuate his intricate creations. The name Russian gold gave way to rose gold along the way, due to its popularity worldwide. Whilst yellow gold has always been associated with luxury, white gold and rose gold have gone through ups and downs in popularity.

A notable time for rose gold for instance, was the 1920's. The fashion and decor of the Great Gatsby movie might have influenced your vision board with flushes of yellow gold, but white gold reigned supreme during the era. The Art Deco era of the 1920’s was an era of opulence and decadence, with striking designs still talked about today. It's known for its sleek geometric patterns and symmetry, and vivid colors. Jewelers of the era were very creative in their design, and often used rose gold as a way to accentuate their creations with warmth and femininity.

But as World War II unfolded, platinum was considered vital for war efforts, for uses in engines amongst others. Many countries had restricted it for non-military functions, and some had even outright prohibited its use. This was when yellow gold and rose gold rose back in popularity as the star of the show once more.

Now history is all and well, but if we talk about rose gold, how does it fare against yellow gold and white gold? We discussed the pros and cons of each gold color a while back, and got into the nitty gritty of how to pick your gold color based on skin tone, how hypoallergenic it is, its durability, and style.

At Gardens of the Sun we use 18k gold for all our jewelry.This is because 24k gold isn't a practical choice for jewelry! Our rose gold uses 75% ethical gold. The color of the rose gold we have in stock is quite soft, and not glaringly bright - a lovely shade of subtle. This softer tone makes rose gold a dream to design with!

Let’s get closer to rose gold. How do we use rose gold to create the perfect jewelry?

Rose gold emphasizes the warmer tones of these stones!

But rose gold doesn’t always have to be combined with warmer toned gemstones. One favorite rose gold combination involves a cool, slate grey tourmaline that’s been accentuated with sparkling grey diamonds. There’s a wonderful balance of cool and warm that’s gorgeous to look at. It draws the eyes and demands attention. If you’re not into tourmaline, you can create a similar effect with salt and pepper diamonds. 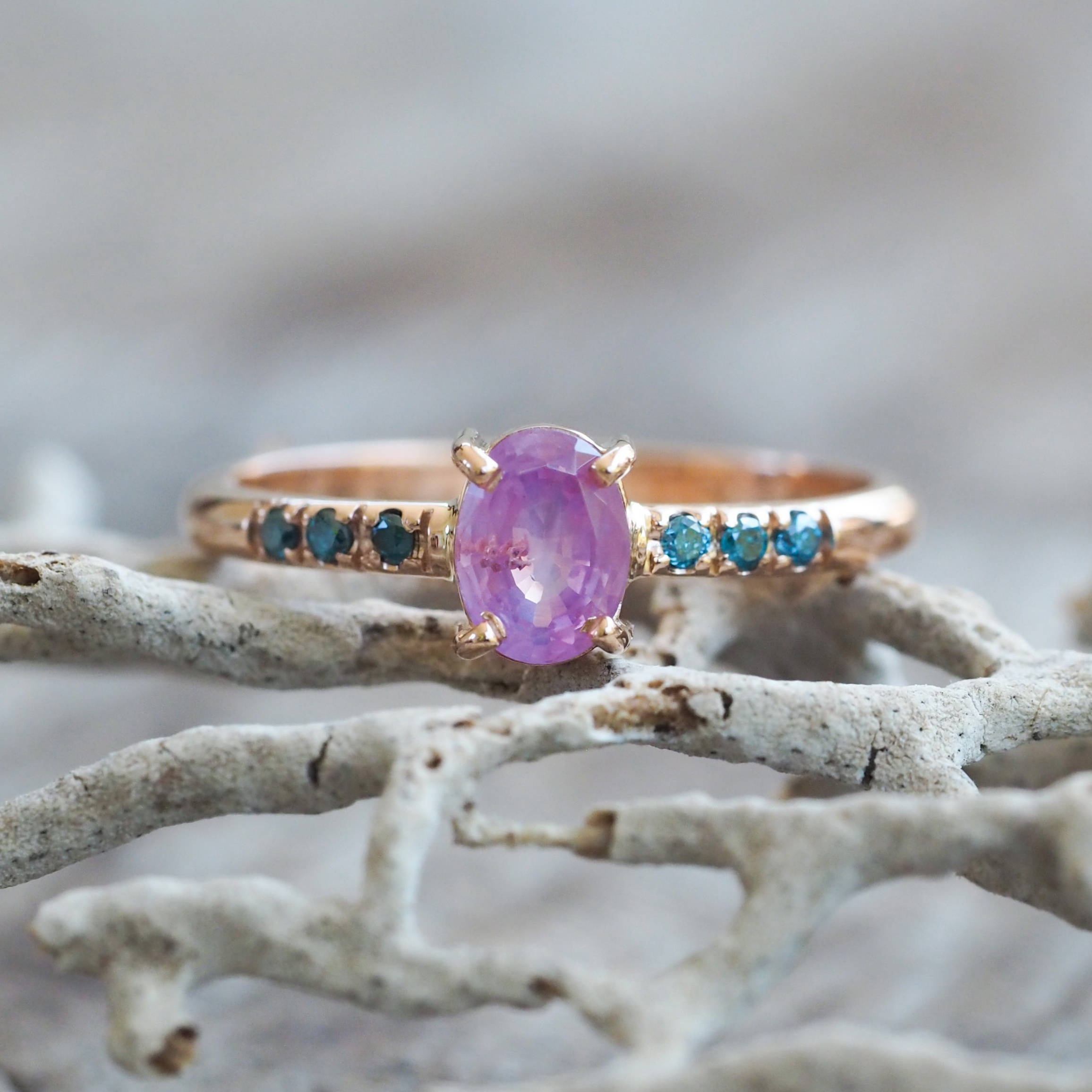 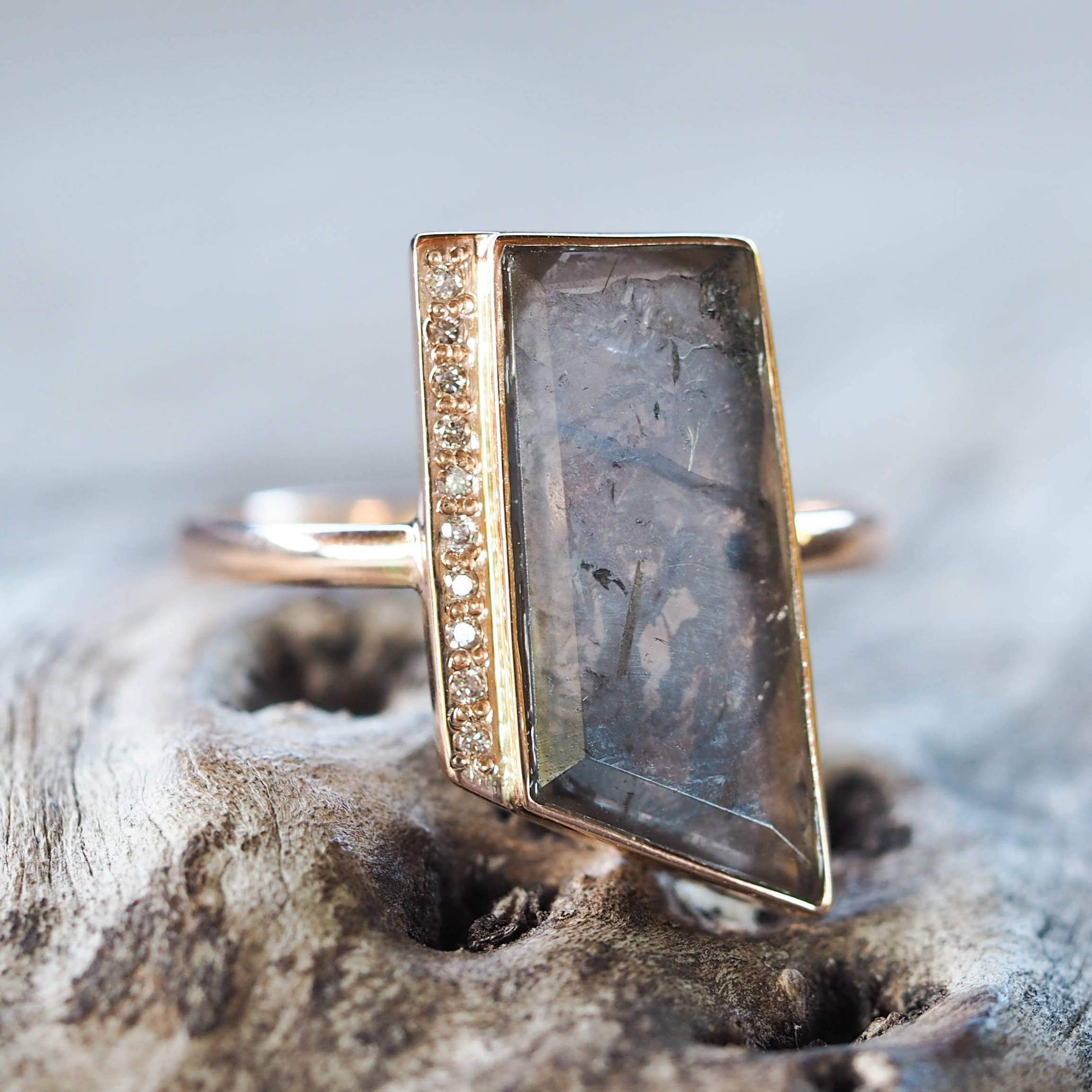 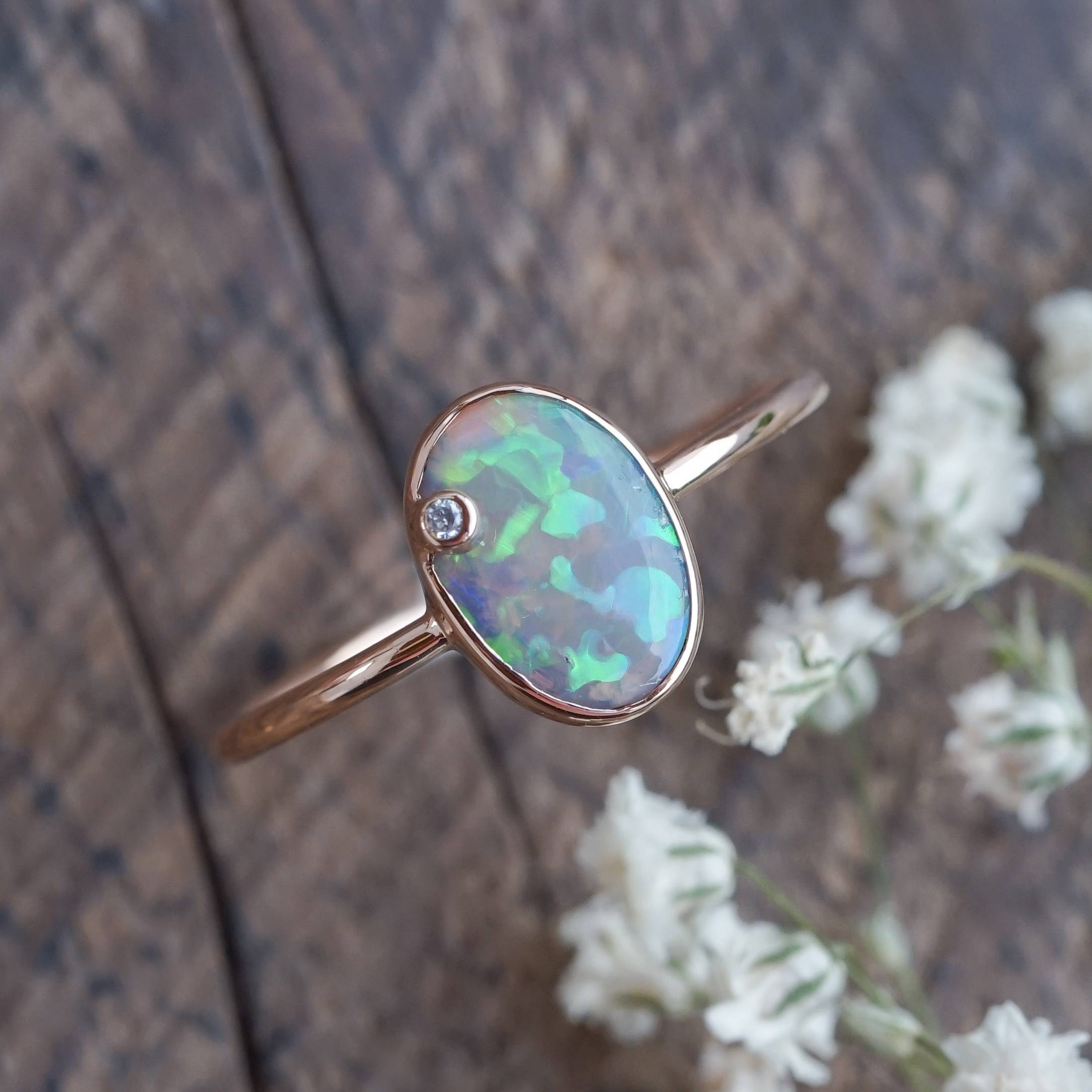 If you’re looking to play around with color tones, check out our Custom Opal and Diamond Ring in Gold. Opals have always been a popular pairing with rose gold as it can be both cool and warm in color!

You can also combine opals with other stones to explore the full potential of this colorful stone.

Customizing jewelry really doesn't have to be scary! You can talk to us directly, or you can check out our guides on combining stones based oncolor theory or even based on theelements that each stone represents.

Did you know that sapphires were often paired with rose gold in Victorian era England? You can still find a lot of heirloom jewelry using rich blue sapphires mined in India set in rose gold from the era.

Princess Diana's famous sapphire ring was actually inspired by a sapphire from the Victorian era! Queen Victoria's sapphire and diamond cluster brooch to be precise. It was given to her by Prince Albert as a wedding present in 1840.

We put our own spin on the rose gold and sapphire combination on this Pastel Sapphire Ring Set in Rose Gold. Featuring pastel toned sapphires ethically sourced from Montana, USA, and Sri Lanka. 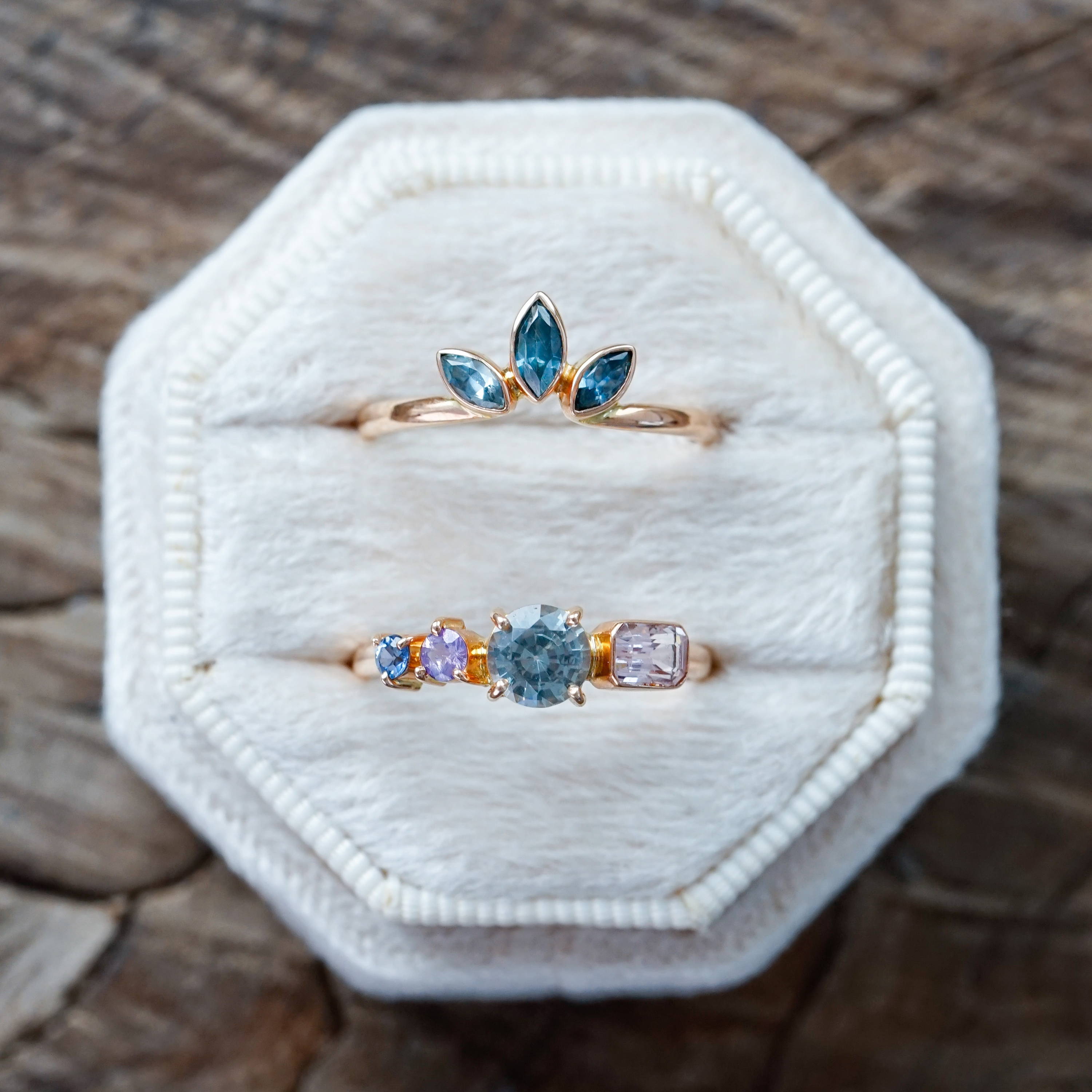 DESIGN YOUR OWN ROSE GOLD RING 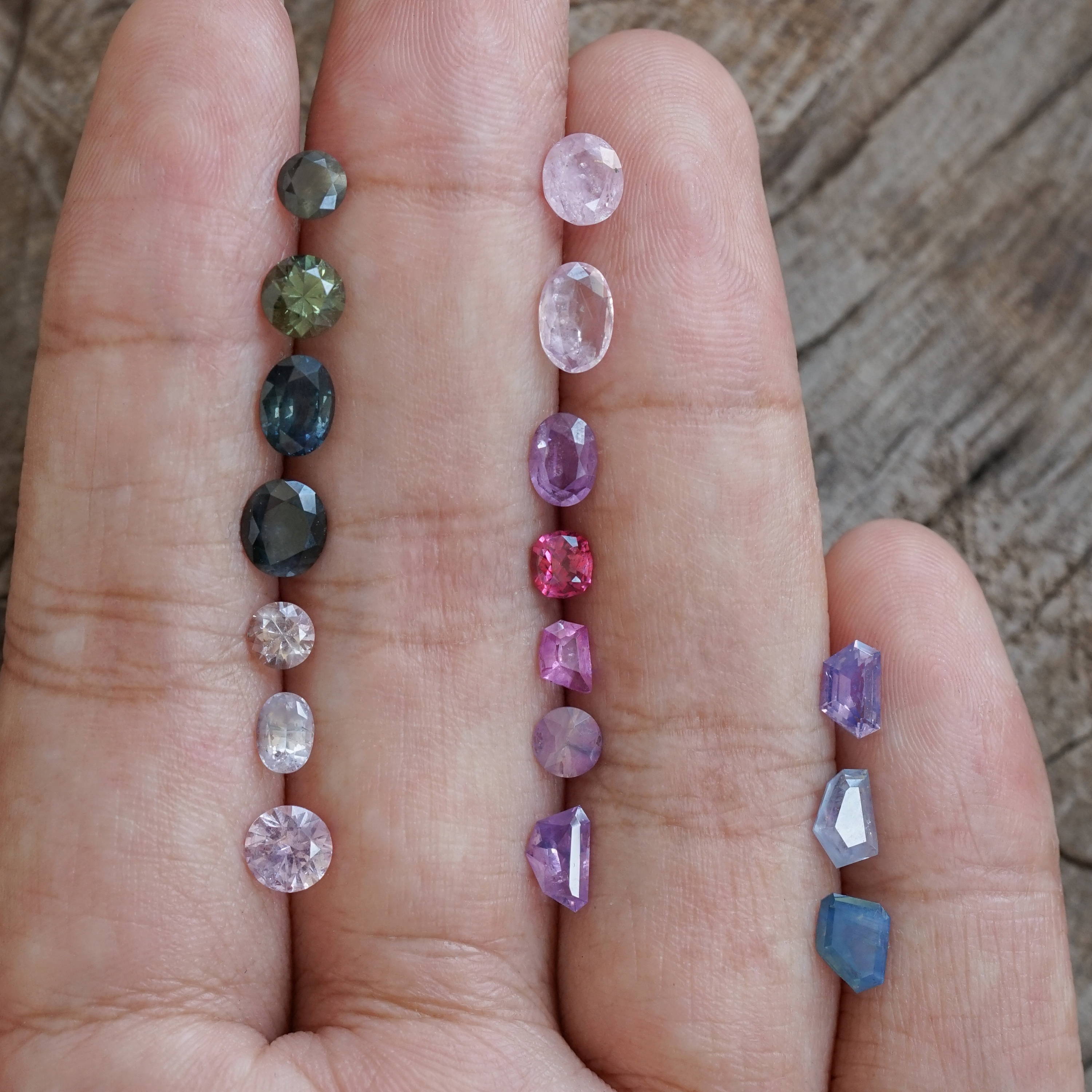 But remember that we got your back! Feel free to ask our team for a mock up of your preferred metal with the gemstone or diamond of your choice.

For the ultimate ethical rose gold ring check out our Custom Borneo Sapphires (check out the available stones!) Both the gold and sapphires are mined by indigenous Dayak miners using low impact methods.

Ready to design your own rose gold ring?

I WANT A ROSE GOLD RING!